A Comparison of my Top 3 Roguelike Deckbuilders 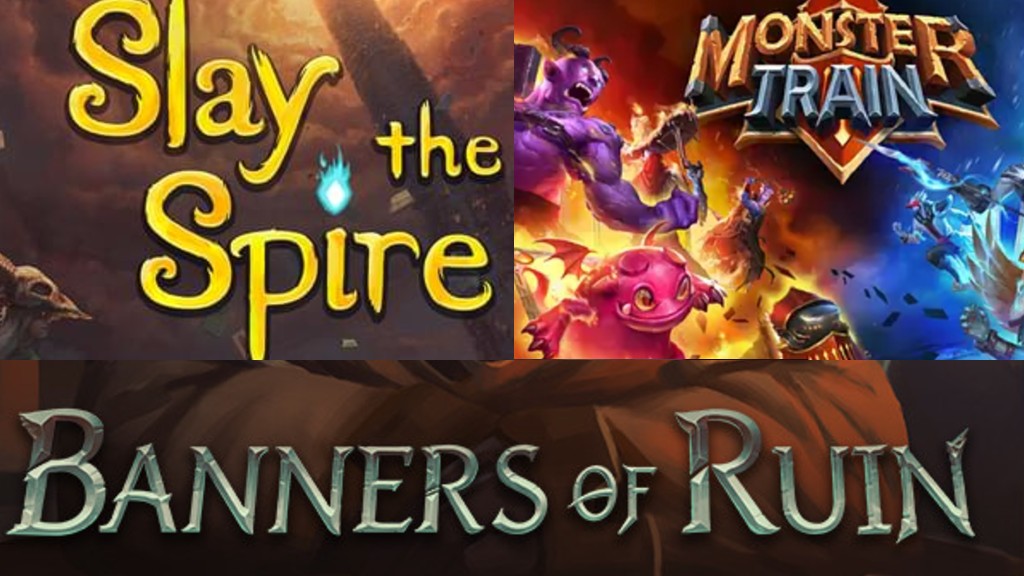 Here is a genre I had no experience in until last year, and I very quickly fell in love with. Better still, it appears that the roguelike deckbuilder appears to be here to stay. Just when you think the hype over one game has started to drop, another comes along and the train gets going again. That is because it’s a bit like a tin of pringles (they are still a thing, right?) – once you pop, you can’t stop. You lose one run, you know why you’ve lost it, and you just have to do it again. Remember when Civilization had you like that? “Just one more turn”? Roguelike deckbuilders go one step further and encourage you to do “Just one more run”.

I have come across three that are most certainly worth your attention, but if I had a choice of one, which would it be? To make one choice won’t be easy, but let’s at least try. 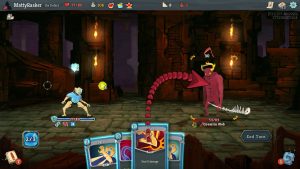 Arguably the game that ignited the popularity, at least from my experience, Slay the Spire is a dark but colourful, and sometimes humorous, game that has you picking one of three (and then four) characters to go and ‘slay the spire’. To tell you what that spire is would ruin the surprise, but slay it you must. You do this by going through three acts, ending up in the final act where you will face, err, the spire.

Each character has their own strengths and abilities. The Ironclad relies on brute force and healing, The Silent with her speed and poison, The Defect with its spheres of death. I won’t spoil the character you will unlock, but she has a really special and unique ability that, when played right, spells doom for your enemies.

Each act gets more difficult, but with the right cards and relics, you’ll be pulling off some great combinations that give untold satisfaction when they take down even the toughest of enemies without taking too much damage, if any.

A turn in combat will allow you to either strike the enemy with an attack, cast a spell, use an ability or boost your defence. When you play the cards and what order will matter greatly sometimes, so a lot of thinking is required, certainly in the later stages. 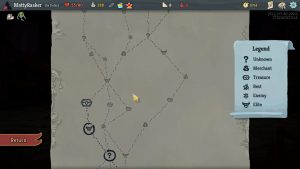 On the map, you have to decide which foes to fight and what places you would like to visit. You may decide to take on a boss just so you can go and spend some money with the faceless shopkeeper (he’s a lovely chap I can assure you), or perhaps you need to visit a campsite so regenerate your health, but that in turn will mean you can’t beef up a card. Every decision counts, and that is what makes Slay the Spire insanely attractive.

My only real disappointment with it is that the soundtrack is lacking. There is nothing really inspiring about the soundtrack, it just sits there in the background adding very little to the game.

WHY TO BUY
If you want a solid introduction to the genre, Slay the Spire is the way to go. I find it difficult to imagine how this game can get old, and with a superb amount of additional modes and mods available, you’ll be going back time and time again. 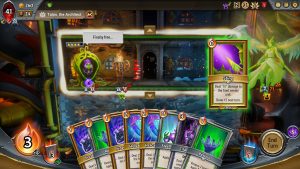 Monster Train sees you taking a trip to hell while the good guys try to stop you from getting there. You start by choosing a hero from a particular ‘clan’, and then choosing a secondary ‘clan’ to aid you. This is where Monster Trains strength is here – combining clans and using a combination of their cards to come up with the strongest deck possible. Again, as you work your way through each stage, you’ll obtain cards, transform them or even drop them in order to build a better deck.

Combat takes a slightly different angle to Slay the Spire – you don’t attack enemies. You are there to defend the train, and you do this by casting monsters on any of the three floors that the attackers have to fight their way through. Once at the top, the attackers have to kill your Pyre. Once that is dead, you are dead and your run ends there.

I don’t find the strategy of Monster Train as engaging as Slay the Spire. There are some sweet combos to pull off, and as rewarding as they are, I never really get to feel a sense of achievement. My biggest downfall with Monster Train though is that runs tend to be over really quickly. I was quite surprised how quick I managed to beat my first one. 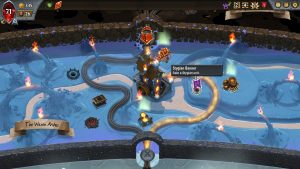 That aside, I love the creatures you can cast in this game, something you can’t do in Slay the Spire. There is much to unlock and learn from each clan, and with the ability to combine clans, there is endless replayability here. Card upgrading too is really cool, as are some of the relics. For example, I once had a game where all my train stewards were buffed to well over 20 defence and attack, which made life very easy indeed.

Monster Train also has one hell of a soundtrack. There is most definitely a progressive rock vibe going on here, and I totally dig it. It sits in really well with the overall artistic nature of the game, and on that basis I rate Monster Train very highly indeed.

WHY TO BUY
If summoning an army of monsters to defend your train while listening to some awesome rock music is more your thing, Monster Train is the one to play. 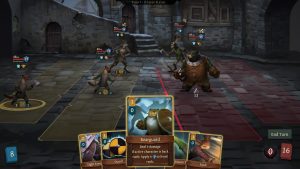 Banners of Ruin has recently been released on Early Access, but already it’s got a solid community and some good feedback in Steam Reviews. Here, you have to fight your way through a city as a ragtag army of rebels, taking back control of a city that has fallen to an army of no do-gooders, House Elder. You start with two rebels, but soon end up recruiting more (should you wish to), while acquiring new cards, weapons and armour.

Combat begins by placing your units on either your front line or back line. Then, with each turn, your units have a certain amount of stamina which you use to spend on playing cards, either the characters own unique cards, or a card which any of them can play. Special cards need willpower to play, but willpower does not recharge during combat, so you have to be careful with which ones to play and when.

Again there are three stages, much like Slay the Spire, and on each stage you progress through the streets by choosing on of three cards on top of what I call channels, until you’ve exhausted the channels and reach the final boss of that stage. You’ll encounter basic combats, elite combats, weapon caches, situations that need resolving and may reward you, and chances to offload basic cards. One thing you can’t seem to do is upgrade cards, which is somewhat disappointing. 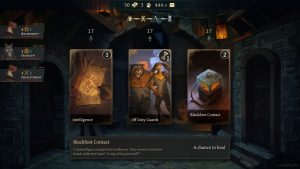 Another disappointment with Banners of Ruin at the moment is that there is a lack of animation of the characters, which somewhat ruins the immersion. That said, the art style is just what I love – fan of Armello or Redwall? You’ll be right at home here. A cracking soundtrack too.

WHY TO BUY
Bearing in mind it is still in Early Access, don’t be put off by the initial challenge that the game will throw at you. There is a lot more content to come and work to be done, but as the game stands now, you should have a blast with a few good runs.

Well, they are all unique in their own way, and that’s good, right? Why would you want three games in the same genre to play in exactly the same way? I enjoy all of them in their own special way. If I had to choose one that would be my ‘go to when nothing else is grabbing me’, that would have to be Slay the Spire. If I wanted something with a bit more action and excitement (or perhaps just to listen to that sweet soundtrack), I’d have to choose Monster Train. If I wanted something slightly more immersive and strategical, Banners of Ruin wins there.