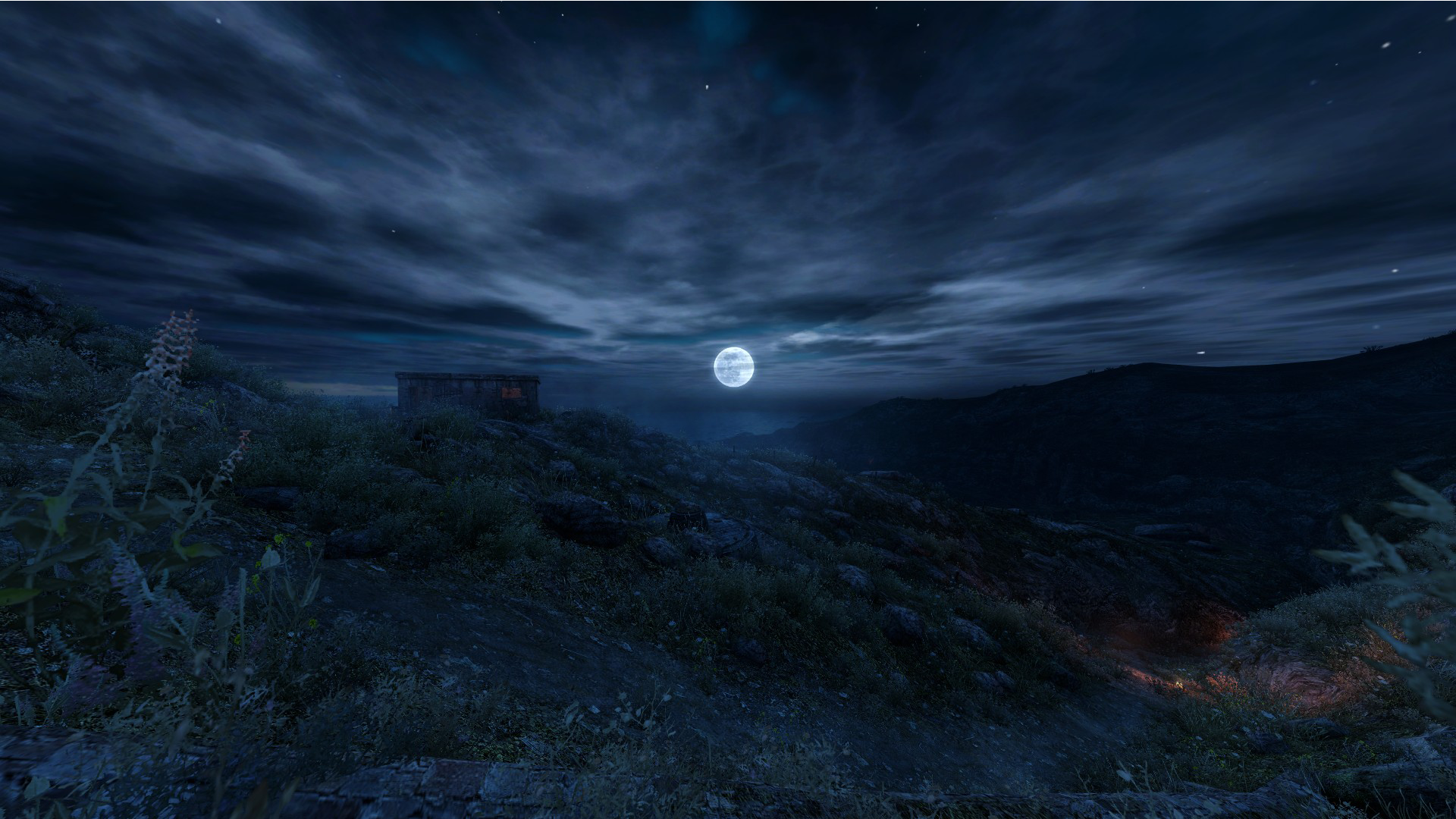 A little gem of an experience can be found while trawling through the extensive list of games on Steam called "Dear Esther". While not strictly a game, it requires player interaction in order to complete it. But you're not competing against anything, you are simply playing the role of a narrator of a story that you listen to while walking a set course across an island.

Sounds rather harmless, and it is. But you don't quite understand what you're in until the music, the sounds and the visuals lift you out of normality. Think yourself immersed into a story that slowly grows on you as you move your way forward. This is Dear Esther.

If you are now enticed to spend just a few quid on this delightful work of art, don't read anymore as it will spoil it for you. Goodbye.

However, if you have played and are wanting to read another take on the story....

But it appears there is much discussion on what the story is actually about. Having played it twice through now and studied others interpretations, here's mine with pointers on key items.

And yes, a reminder, there are SPOILERS in this. So please, do not read on if you've not played it, and if you haven't played it, wait until it comes down to £1.74 on Steam and pick it up. Then come back.

The Narrator
The Narrator is who you control throughout the game. His name is not revealed at any point in the game. He was in a relationship (possibly married) to Esther, who throughout the game is mentioned as the letters whom the Narrator is writing to are addressed to Esther. He is lonely, ridden with guilt and is lost without Esther, who has died. he is composed near the start of the game, and by the end he becomes more erratic in his thinking. I am inclined to think that his age sits him in his 50s, the voice you here is also definately suited to a man at this age. (see EDIT under Esther).

Esther
Esther was in a relationship (possibly married) to The Narrator. She has died, while in the presence of The Narrator and a gentleman called Paul. She was around the same age as The Narrator at at the time of her death, which I believe was recent.

*EDIT* Based on the comments made below by others from their observations (thank you to all!), it also appears Esther was pregnant with the Narrators child. So perhaps the Narrator is younger than I originally thought.

Jacobson / Jakobson
Jacobson was a man who moved to the island around the time of Donnelly. He planned to build his house, raise animals and eventually have a family. He was not popular, and died soon after he built the house. I believe Jakobson is the same person.

Paul
Paul is key to why we have ended up here, playing this game, as The Narrator, on this island. He is a sales executive who lived in Wolverhampton. He caused Esthers death. And here's why....

The Car Accident
Not long ago Esther and The Narrator were travelling in the same car along the M5 between Exeter and Bristol. Paul is in another car, who loses control somewhere between the Sandford turn off and the Welcome Break (so the crash is recent, last 10-15 years or so), skids and crashes into the car carrying The Narrator and Esther.

Paul is first accused of being drunk behind the wheel, as alcohol is on his breath as he had some drinks following a sales conference in Exeter. He was travelling on his way back to Wolverhampton. But The Narrator tells us later in the game that he was not drunk. We can only presume then that he was not over the limit, but whether his alcohol intake affected his driving, in order to cause the crash is something The Narrator considers, as earlier in the game, he accuses him of being drunk. So what caused the crash is not clear. Paul is in a bad condition following the accident and has to be resuscitated. Esther is trapped in the car, presumed dead as the car had to be cut to get her out and it looked as though it was "dropped from a great height".

The precise location of the accident remains a debate, but The Narrator does say it was somewhere between the Sandford Junction (Junction 21) and the Welcome Break Services (Junction 19). The final junction motorway marker is present in the game, as is the turn off sign, and the bridge across the motorway, presumably the junction. So the most popular thought location of the accident is here. Also, the Narrator talks of the "traffic backing up all the way to Salford", which makes this a viable location. However, that real location does not have the banks by the motorway like the game does, and the signage displaying the turn off for the junction is different in layout. We put this down the Narrator being vague on its location when trying to recollect the events of that tragic day.

The Narrator tries to find the location of the accident, having driven up and down the motorway 21 times, but cannot find it.

The Narrator meets Paul
After the accident, The Narrator travels to meet Paul in his home in Wolverhampton. Paul at this time is dying in his own guilt and regret - the car accident has destroyed his life as much as The Narrators. But The Narrator, not seeking an apology but wanted to offer some no hard feelings towards the man, tries to "connect" with Paul but Paul is too nervous. it is obvious though that The Narrator wants to remove any bad scent between the two in order to get on with their lives as The Narrator wants to believe that alcohol did not cause Esthers death.

Pauls Death
It is not clear how or when Paul died, but certainly by the start of the game, Paul has died, perhaps commited suicide with guilt. The Narrator is saddened by this.

The Island
This is where the game is set, an island in the outer Hebrides, which can be seen from the mainland as The Narrator tells us he can see the mainland. The Narrator has been here before, perhaps he came here with Esther, but certainly he has been here in the past, having been inspired by Donnellys book about it (the one he got from the library in 1974). by the time of the start of the game, he has been living here for a while, in the house where Jacobson lived.

There are ghosts on this island, but to be honest, as there are 5 of them, I am to assume they are Esther, Paul, Donnelly, Jacobson and one other. I can only think the one other is the disfigured ghost, that could be anyone involved in the accident.

*EDIT* Due to the comments below, we established that Esther is pregnant. 5th ghost? Invovled in accident? Disfigured? .......

The Islands history (Donnellys book) in relation to the story
This is where I think many have interpreted this game as a dream while The Narrator is actually in hospital dying following the accident, or rather recovering from it. A lot of comparison is done between the island and the car accident. He also tries to compare Esther to Donnelly, Jacobson to Paul.

Which is why he calls them, at the end, Esther Donnelly and Paul Jacobson. I believe they are not their actual names, just comparisons in The Narrators mind.

I believe that The Narrator is actually walking that island, recollecting the accident and the events following it, and comparing it to Donellys book. this game is not a dream sequence of any kind.

The Narrators death
At the end, you are seen falling from the beacon. And then, you turn into a gull and you fly off. It is at this point the Narrator dies and his soul, so to speak, takes off like a gull, and joins the other two, Esther and Paul, who's souls are represented by the two joining gulls at the end.

*EDIT* following the comments left below, it becomes apparent that Esther was in fact pregnant. So, are the three gulls the Narrator, Esther, and the unborn child? This seems more likely. It also makes the ending more sentimental, or, if anything, brings a tear to your eye.

So yes, I believe after all that The Narrator went through, he ends up committing suicide and joining Esther and his unborn child in death.

Biblical References
There are biblical references in the game. Damascus is compared to Wolverhampton, assumable a comparison to The Road To Damascus (or, the road that Paul was taking back to Wolverhampton). The Road to Damascus is sometimes used to describe a big change in someones life. This I guess is relating to the car accident.

Lot's wife is mentioned in Genesis 19, and is also mentioned in the game. Interestingly, Lots Wife is also a location in Marsden Bay in England, a Sea Stack, similar to one that is found on the beach in Chapter 1. I am however unclear on the other references and their meaning to the story. Only the reference to "looking back" makes any sense to me.

The number 21
Whats with the number 21? That crops up often in the story. To be honest, I've no idea. 21 is the starting age of adult life, but that's as special as it gets I guess.

*EDIT* thanks again to readers comments below, 21 certainly has some reference to alochol and the number of nodes on anti-lock brake systems. Coincidence that the two are in reference to each other? Quite possibly.

So there we are, that is what I have interpreted from the game and imagined in my mind. You may have something totally different, and I am sure if I play through it a third time something else will come up. Your thoughts below are welcome!