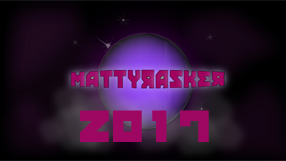 Well, that is it! Another year passes. A highly charged year of insane politics and clashes of ideologies cannot hide the fact that actually, it's been a pretty fantastic year of gaming. Here are my gaming highlights (or what I am going to call my Raskup. Get it? Roundup? Raskup? Ahh forget it :D) of 2017.

I started this year fighting aliens in the super popular turn based tactical game X-Com 2. Most of my soldiers were renamed after those of you who are regulars to my streams. This resulted in Varanas being a supreme killing machine, obliterating everything in his path, while Gary was busy killing Mazy accidently because apparently, when an alien mind controls a soldier, that does not necessarily mean they come out of overwatch!

Overall, I enjoyed X-Com 2, and the fact that it is moddable makes for some great customisations. Like Arnie and Ainsley Harriot being on your team:

Watch Ainsley and Arnie from MattyRasker on www.twitch.tv

I am still not fond of the time missions. I see what they are trying to achieve, but that doesn't necessarily mean they are enjoyable. But overall, it is a good game. Not sure how it's going to compare to the REAL new X-Com....(see Phoenix Point below).

Another game I found this year was Offworld Trading Company, a surreal mix between Real Time Strategy and Business Simulation. You'll spend an evening playing the tutorial, but it is totally worth it. The aim of the game is to eliminate your competition by making as much money out of resources as quick as possible so that you can buy our your competition. Last business standing wins.

Each game takes around half hour to complete. Tremendous fun is to be had here, and if you like the intensity of a Real Time Strategy like Company of Heroes, mixed with the cunningness of a Business Simulation like Transport Tycoon, I highly recommend it.

Edit: big thanks to SlipperyJim who actually gifted this to me for my birthday. V v kind of you!

Now here is a game that surprised me. Zombie survival is not a genre I admire much. In fact, I think there are simply too many games in this genre out there. But, some friends had a server up and running so I thought I would give it a go. After all, if your going to criticise a game or genre, at least try it out first, right? Well, 90 hours later, I can see why the genre is as popular as it is.

I had an absolute blast with friends, building a base, and then surviving against a horde of zombies at night. I thought of it as an adult version of Minecraft (another game I hadn't really given much thought, until my son started playing it this year!). It's an ugly game, and it doesn't really sound all that great either, but I had fun, so I recommend it - but only if you have a server to play on, and you have some friends to play with.

Those of you who know me will know that I started streaming because of a game called Chaos Reborn, made by those lovely people at Snapshot Games, and supported by the small but loyal and friendly community that it has. 2017 saw them start their crowdfunding campaign on Fig for their latest game, Phoenix Point. Think X-Com with a Lovecraft theme - it is the near future and some horrible mutation virus that has lied dormant in the ice is released into the atmoshere as the ice has melted due to global warming. The campaign was hugely successfull, and the game is hitting Early Access next year. I'm dead excited about it. Not only because I love a bit of Lovecraftian Horror and some Turn Based Tactics, but also as I volunteered to help out on the demonstration stand at the PC Gamer Weekend next February.

Read more about Phoenix Point here. Here is also some early gameplay by Julian himself:

2017 also saw two of my top 5 games being re-released in HD glory on Steam. They just so happen to be the two games I've been dead keen to see on Steam, and they both arrived within a matter of months from each other!

Rez HD is a short but very exiting musical experience where you breaking into a supercomputer and fighting a virus that is slowly becoming self aware. It is simply a gorgeous looking game with a superb soundtrack - an experience everyone should have at least once in their life. I heard it's pretty amazing too in VR. Rez Infinite on Steam.

Okami HD is another very artistic game. Done in that super lovely japanese cell shading art style, you play as Amaterasu, God of Sun, reincarnated as a white wolf, fighting an evil that has spread across the land. It has everything from lovable characters, a great story, and plenty of hours of adventuring across a gorgeous landscape. Okami first arrived in 2006 - just as I was going through a fundamental shift in my life. So to relive this game which came out at a time when I was changing myself really feels nostalgic, and in a good way. Thank you to Capcom for making it happen. Okami HD on Steam.

2017 also saw me explore Youtube a little bit by doing a series of 15 minute playthrough videos called "15 Minutes to Rask". This also gave me an excuse to play some games I hadn't played in a while!

Check out my channel here and remember to hit subscribe!

Other worthy mentions of 2017

Darkwood was finally released this year! I had been following it avidly during Early Access, and had been streaming it too to help push the game a little. Turns out, when it was released, it was hugely popular anyway, much more than I had expected it to be! So huge congrats to the developers.

I have also recently been enjoying some Cities: Skylines, a great go to game when you want something to chill to and enjoy at a slow pace.

Oh yeah, and Wolfenstein: The New Order. Now there is genre I never really play but oh man, what a fantastic game that was. Story, characters, gameplay, it had it all. Can't wait to get stuck into The Old Blood.

In 2017 I setup the PlanetRask Discord Server (invite link)and the Steam Group, a place where regulars to the channel could hang out. By the end of 2017, the community has evolved and while it is still a small community, it's a really friendly one. By the end of the year, we had started to arrange Knockout Tournaments every Sunday, Rocket League being the most popular. Thank you to those of you who have joined in and participated in these, without you the Knockout Tournaments simply wouldn't exist. I hope you have enjoyed them and look forward to more in the new year. You can find the results of all the past tournaments here on the website.

And that is about it for 2017! 2018 should be a pretty big year for me, and I want to provide a way for you all to support me should you wish to do so. The streaming shall continue, and I have a couple of ideas for some new Youtube videos so stay tuned for those. For those who tuned into my Music production streams, remember to swing past RaskMusic to hear the latest there.