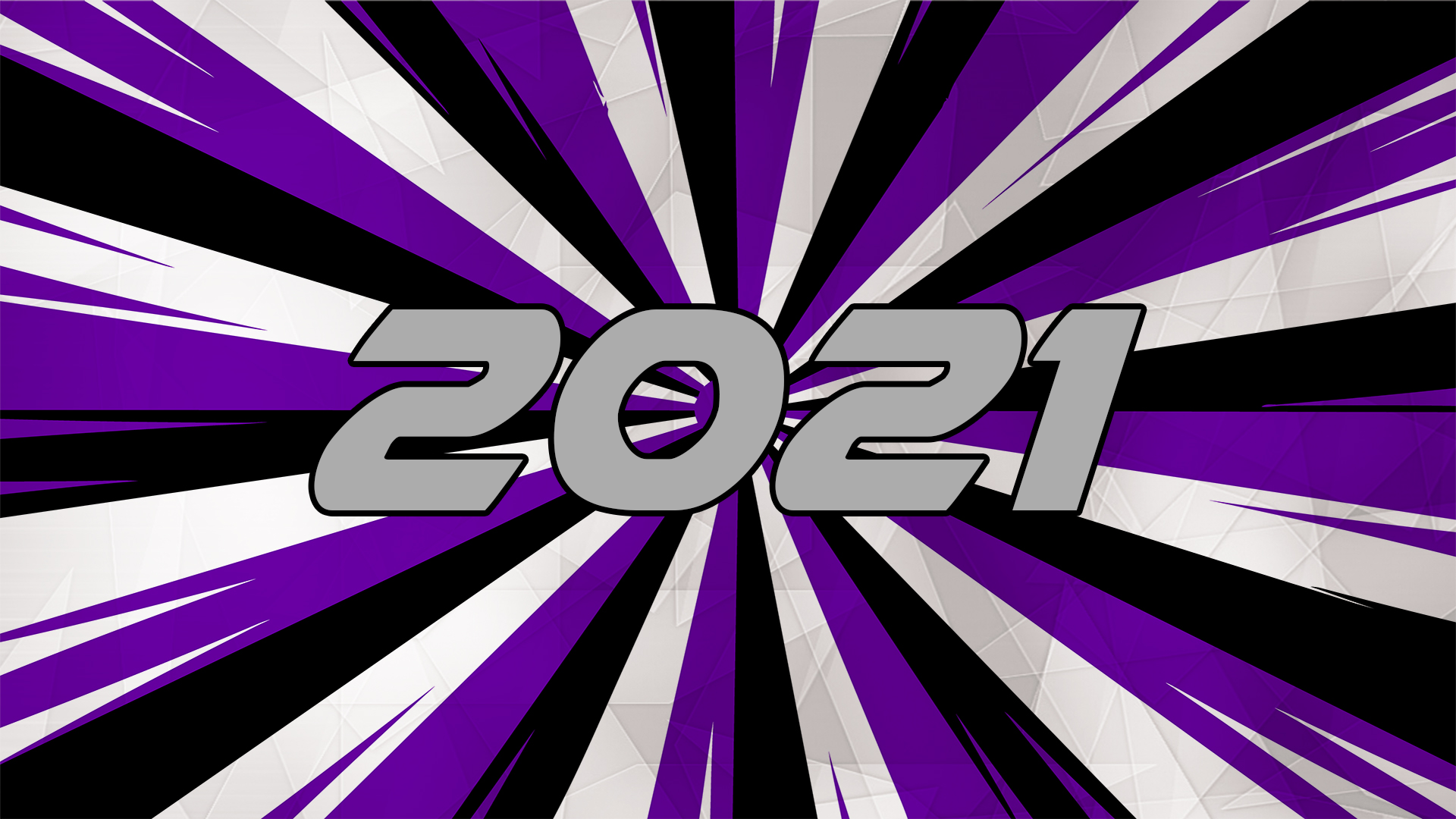 Yes. It only it seems like a matter of weeks ago I was writing the 2020 Annual Raskup. Unless of course you define 'a matter of' as '48', then that statement is factually correct. It also seems appropriate to be writing this as I've spent a week trying to shift an illness that, according to tests, isn't the 'C' virus, but still - in yet another year dominated by the aforementioned infection, some great games were released and played on the PC which also made it to the channel.

Enough introduction - let's dive in, shall we?

The year began with two games, both of which I largely returned to throughout the course of the year. I'll focus on one later on. The other is Iron Conflict, a Real Time Strategy MMO with a progression system similar to the likes of World of Tanks and War Thunder. After a tutorial featuring some rather dodgy voice acting, you jump straight into a 10v10 PvP where each player takes in a squad of three units - making a battle 30 vs 30 units. You form a squad out of a selection of tanks, infantry, anti-air, artillery, fighter planes, bomber planes, and surveillance planes. There's a variety of games to play from across a small selection of maps, the terrains of which provide their own unique tactical advantages and disadvantages.

After each battle, you earn XP and in game currency, which you can then spend on either upgrading your units, or unlocking new ones at higher levels. While progression appears quite quick to begin with, you will soon hit a point where the grind becomes quite real. But that's OK - because the game is worth the play. I absolutely love the game - the battles can be intense, the combat is quick and there's never really a dull moment. You get rewards for logging in daily and accomplishing missions. What can put people off is the grind - and the lack of players. The latter reason I simply don't understand - it is a solid strategy game which can be a lot of fun, especially with friends. But more times than not, you will end up facing AI players rather than human players, and that is an issue as AI can make questionable moves.

The other game basically dominated my gaming year of 2021 - and that game, my friends, is MechWarrior Online. But wait! This came out in 2013, right? Right! And it's still going strong. More fool me for taking the Steam reviews seriously back in those early days. MechWarrior Online is definitely a game I wish I just played, because quite simply - it's brilliant. As a player of MechWarrior 2 and 3, as well as the MechCommanders (and more recently, the super good Battletech), both the concept and the gameplay was instantly familiar. Most, if not all the Mechs, from the Battletech universe are there (I'm sure the hardcore fans out there will tell me otherwise, but certainly all the ones I recognise from past games are there), all of which you can configure to your hearts content. Even better is the fact that it is free to play, and you genuinely can play for free and earn in game currency to unlock new mechs and weapons. There isn't a "level progression" system - it's more down to how you configure your Mech, how you fight with your Mech, and, arguably more importantly, how you play with your team.

With a vast range of maps, some of which are being updated, good variety of game modes, and a community who have been an absolute pleasure to play with and learn from, I recommend MWO very highly. For a game that is approaching 10 years old now, it still looks and sounds great, and has gameplay that has you coming back for more. Thank you Piranha Games and the MWO Community for giving us a great game, and for being very welcoming to new players.

2021 just so happened to be the year that MechWarrior 5 came out. With gameplay very similar to earlier MechWarriors but with a very different Mech configuration system, MW5 is just as satisfying as the earlier games of the series. The added bonus of MW5 is the co-op feature - friends can drop in and out of your game to help you beat those missions where teamplay may be more beneficial than the AI just wondering around shooting things and standing in the way of your carefully aimed PPCs.

With all of this Mech action buzzing through my veins, it made sense to return to my Battletech campaign. You know, the one I started so many years ago. Well, I'm happy to write that, after 100+ hours and three restarts, that campaign was blitzed live on the channel. What a great feeling that was.

As hard as it might be to believe, certainly if you are a regular viewer of the channel, but this year wasn't ALL about the Mech. Off the channel, I completed the campaign of another superb RTS, World in Conflict. Another game that is getting old, but still featuring some some solid gameplay. It also still looks very pretty. Set in an alternative 1980s were the USSR invades the US, you play both sides in the conflict, following the stories of the men and women fighting this fictional war. While there is some commanding of units, you end up relying quite heavily on throwing down tonnes of airstrikes, artillery shells and setting the ground on fire with an offensive amount of napalm. It's also not incredibly challenging. But I always look for a solid single player campaign in an RTS, and World in Conflict did not disappoint.

Phoenix Point continued to consume a lot of my Turn Based Strategy time this year. As I mentioned last year, a rather lacklustre version 1.0 has evolved into one of the best Turn Based Strategies in recent times via release of new DLC and patches. So much so that I'm inclined to say that it is better than new XCOM. I know, I love new XCOM too, so much so I completed the campaigns on both. But Phoenix Point has, in my view, features that XCOM doesn't which makes the gameplay more intriguing, engaging and flexible. This in turn also making it more challenging in many ways.

I also jumped into a couple of simulations and builders. Jurassic World Evolution was very enjoyable. Theme Park with dinosaurs and Jeff Goldblum, as you'd probably expect. While it's an incredibly difficult game to lose, it's also a pleasure to play. There's just enough complexity to get you thinking on how to best please your guests, but also enough features to get your creative on - from how to breed your dinosaurs, finding out which dinosaurs play well in the pen or instead choose to fight to the death, to the overall design of your park. For full immersion, you can also adopt the role of the park keepers. Jumping into a jeep to resupply your dinosaurs with the food they need, or tranquilising that escaped T-Rex from the comfort of a helicopter, really added a great dimension. I was however disappointed with the lack of amenities you could build, as well as the business management aspect of the game.

I also played, restarted *JUST* a few times, but finally completed, a campaign of Frostpunk. I went in expecting a casual city builder set in a frozen climate. What I experienced was a frightening, stressful and tense survival where decisions were not only brutal, but vital to the overall success of your game. Frostpunk was challenging, but it was also brilliant.

Other worthy mentions of 2021 - Iron Harvest, a solid RTS game set in the 1920+ universe that I started in 2020 and played on into 2021. Ring of Pain, a deckbuilding rogue like where you are haunted by a yellow bird, taking on creatures that get more dangerous as you progress through the, err, "Ring of Pain".

I also spent this year revisiting some games which I continue to enjoy many months or years after their release - Wargame: European Escalation, Wreckfest, Phasmophobia, Unity of Command. I've also more recently attempted to learn Hearts of Iron IV, a task far easier to accomplish after my many hours of Stellaris than when I first approached the world of Paradox Interactive Grand Strategies in the form of Hearts of Iron III and Crusader Kings II.

Well, this is awkward. For me to award a game "GOTY", it normally has to have been released in the year I am writing about. This leaves me with a choice of two - Iron Conflict and MechWarrior 5. As good as Iron Conflict is and as much as I have enjoyed it, I find it difficult to award it GOTY. I'm not the worlds biggest fan of the progression system it features, and it lacks the player count a game like this needs. MechWarrior 5 is a superb game with a lot going for it, but it hasn't given me the "unforgettable moments" that convinces me to dress the game in GOTY garb.

So it really comes down to the game that influenced me the most. Without a doubt, and this will not come as a surprise to many, MechWarrior Online is that game. It reinvigorated my interest in the Battletech universe, to the point where I've started reading the lore and bought MW5 on release. I met some really great people in the community via the channel (shout out to FDLR and Sam Mouser especially, but there's many more of you out there that deserve a mention - thanks for your friendship and support!), and even 8 years after release, it continues to be supported, updated, played, loved by many, and found by new players like myself.

Already 2022 is looking super hot for new releases. Homeworld 3 is in bound, and Broken Arrow looks super interesting. Choo-Choo Charles looks like an interesting horror too. However, only yesterday did I find out that a new Dune RTS is on it's way. Let me tell you that Dune 2 was THE game that sold me PC gaming. Emperor: Battle for Dune is still one of my top RTSs of all time. Enter Dune: Spice Wars, which I'm told is going to be an RTS with 4X elements, all set in Frank Herberts wonderful universe.

2020 and 2021 have been challenging years. For everyone. They have been years of change, doubt, uncertainty, reflection and re-evaluation. What has kept me sane is the love from my family and friends, my music, but also from you - you who reads what I write, you who tunes into my channel and hangs out with me and the rest of the community. You may even subscribe to my channel, which encourages me to do more and better. I know I don't always make it (as I write this, I should have been streaming, had it not been for being unwell through what can only be described as a horrifically busy week), but know that I always appreciate your support.

If you're struggling, talk. Try meditation. Give yourself space. There are better times ahead. Stay strong.