2012
Do my eyes deceive me....The Flower Kings are actually releasing a new album this year? That is the most awesome news I've heard in a while! And even better, they will be doing a live tour too...2012 is turning out to be a great year...

Banks of Eden
Banks of Eden is only five tracks long. Five! Ahhh, but if you get the Bonus CD, you get a bonus four. That's fair, but five for the base album, man. The good news is, every track is great, and you do get almost an hours worth of music, due to the fact that track one, Numbers, is 25 minutes long. And what a track it is! Numbers is way up there with awesome TFK 'almost half hour long' tracks. The rest of the album is pure, high class progressive rock, the type you've now come to expect from The Flower Kings by now. I never quite worked out the theme of the album, but that's OK. It's a highly enjoyable release and one that I do go back to often.

London, 2012
My friend Ashley and I go to see them live, and it's an incredible performance. As I expected. I bought a T shirt that was way too small for me, but I bought it more as a souvenir. 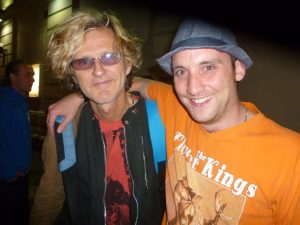 After the gig, we went to the bar across the road and drank a few. Our train wasn't due for another couple of hours. We had to walk past the venue to head back towards Waterloo. The stage door opens. Out walks Jonas Reingold. Holy shit, my favourite musicians of all time are just leaving the venue. I have to go and give them a hug.

And so I do! I warmly shake Jonas' hand and introduce myself as a fan. Oh god, he must be thinking, crazed fan who has had a few waiting outside for us 🙂 But we manage a conversation, we talk about music for a bit, and how most of my music seems to have him as the bass player in whatever band I listen to. We talk about their travels and their tour, sounds very exhausting. We get a picture with him, and then Tomas (who seemed very keen to get out of there, sorry Tomas! You're only my favourite keyboard player of all time, bear with me 😀 ) and then Roine, the man himself. They were all really pleasant guys, and I understood they were in a rush, but they took time to get a piccie which made my day. And my year. Thanks guys x

Desolation Rose
A new year, a new Flower Kings album! What is this insanity? We are not worthy!

Desolation Rose arrived in 2013 and the first thing you notice is that the artwork is...well, it's pretty dark. You look at the tracks, "Sleeping Bones", "Dark Fascist Skies", "Blood of Eden". Say what now, this doesn't look like the usual, joyous festivities we normally get from TFK.

And the music is much in that tone. The album is very sombre, almost in line with The Rainmaker. In fact, I could probably make some comparisons to both The Rainmaker and Unfold the Future, but this one gets really gritty. The distortion gets turned up on some tracks too (I'm looking at you, Dark Fascist Skies.).

There aren't, in my view, any high or low points in Desolation Rose. It certainly remains consistent in it's mood, and it's overall feeling of hopelessness. Which is unusual for a TFK album - a TFK album normally invokes me with hope and confidence, Desolation Rose somehow doesn't achieve that. Perhaps that was what they were aiming for. And given that this was their last album, I guess that really was what they were aiming for.

Well, that was until 2018, when Roine arrives with Roine Stolts The Flower King - Manifesto of an Alchemist. Interesting, we've moved back to just The Flower King, a solo project by Roine. What's happened to the Kings plural? Maybe the band has grown apart, but they've done this before. Maybe one day they'll reconvene and give us one more album. Desolation Rose was a good album, but certainly not an album I'd consider as a good send off for a band, certainly a band of their status.

And that, is as they say, is that. The conclusion to my tribute to the greatest band that has ever lived. A matter of opinion of course, but you'll never change my mind. I want to take this opportunity to thank them all, past and present members, for the music over the years. You really are the soundtrack to my life, and I'll always keep your music close to my heart.

So, where shall I start if I want to get into The Flower Kings?
My personal opinion is from near the start - Stardust We Are is a great album to get going on, perhaps followed by Back in the World of Adventures and Retropolis. Paradox Hotel and Banks of Eden are also good ones for newcomers. But Back in the World of Adventures and Flower Power sit way up there for me, Flower Power being my personal favourite. I would certainly save Rainmaker, and Desolation Rose for much later. The Sum of No Evil last, for sure 🙂

Thank you for reading <3